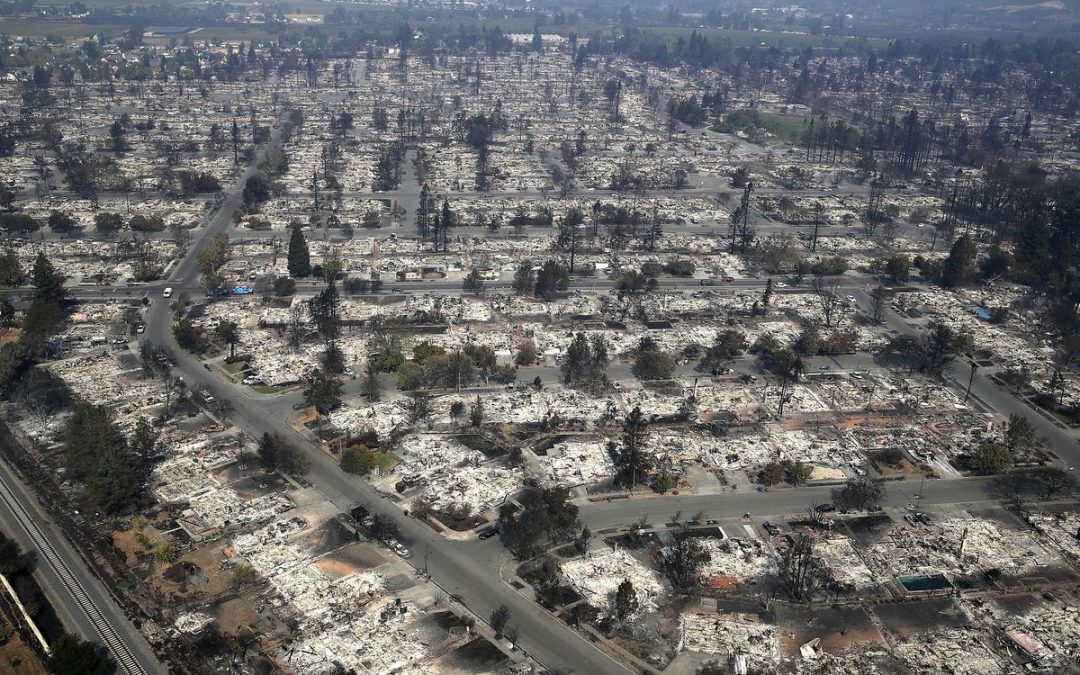 California was declared under a perpetual state of emergency by Governor Brown and now Governor Newsome due to the damaging wildfires that seem to occur like clockwork every year. They also appear to increase in magnitude and frequency annually. The golden state has experienced devastating wildfires such as the Paradise (Camp Fire) and Santa Rosa (Tubbs) sparked by downed power lines, warm weather, and high winds. It’s estimated that greater than 200,000 people have been displaced through evacuations or because they’ve lost their homes just in the SF Bay Area region alone this year.

They’re not only devastating but tragic and costly. The State of California will spend over $1 Billion dollars this year in fighting these fires but the cost to retailers, businesses, and consumers is in the billions as well. Not to mention that the loss of housing will further perpetuate the shortage which is estimated at 4 million units statewide!

Below I discuss the most important topics surrounding our catastrophic wildfires and the ripple effect it has caused in our state.

According to the LA Times article published on 5/8/19, insurance claims for the prior year exceeded $12 billion dollars. Now add to that the insurance claims from this year’s fire destruction. This is a huge problem for insurers as they attempt to honor benefits while at the same time figure out how to stay in business. It’s estimated that nearly 500,000 CA homes worth a combined $268 billion are in an at risk fire hazard zone according to an article published in the Sac Bee referencing Zillow statistics. CoStar Research recently released a statistic that approximately 2 Million housing units are in a fire hazard or at extreme risk of wildfire. We’ve heard directly from clients that many insurance companies are dropping their coverage even when there’s no claim because they’re hedging against future forest fires.

Many insurance carriers are not able to pay out all their claims and stay in business plus many are exiting the California market all together leaving the consumer with very few options. This will lead to an increase in premiums, less coverage, and put even more pressure on housing because insurers will only insure urban developments outside of fire zones going forward.

We have personally spoken with several owners of apartments and mobile home parks located within fire hazard areas about this very issue. Some have gone years with only general liability insurance because either their property insurance premiums were exuberantly high or they could not obtain any coverage. Several owners claimed that their carriers had dropped coverage despite never having filed a claim.

This crisis negatively impacts property sales and values especially in fire hazard areas because buyers will find it nearly impossible to obtain insurance. Without insurance lenders will not provide financing or if the insurance premiums are high it means the borrower will qualify for less which requires a higher down-payment.

Pacific Gas and Electric, northern California’s largest electrical and gas provider, has taken the brunt of the blame for the most recent catastrophic wild fires. High winds have caused many of their power lines to fall sparking these fires. This blog is not to debate who is at fault, I’ll leave that up to the courtrooms to determine. As a solution, PG&E has ordered mandatory shutoffs of their electrical grid throughout many regions of N. California including urban suburbs leaving millions of residents and businesses without power. These shutoffs are estimated to have cost the consumer and the state over $2 Billion dollars per day in losses! The real issue is that their power grid is outdated as electrical power lines belong below ground. The problem is that the cost to move these lines underground is prohibitive since PG&E estimates $3 million dollars per mile to move their lines underground (CoStar Research). Currently, the utility provider has 81,000 miles of distribution lines of which two-thirds (2/3) are above ground and would cost PG&E an estimated $243 billion (CoStar Research).

Governor Newsome’s publicly declared that his goal is to create 3.5 million units of housing by 2025. That’s a great goal and would help tremendously improve the housing crisis.  The issue is that we’re short an estimated 200,000 in construction workers to build the necessary housing (CoStar Research). This figure does not even include architects, contractors, and other vendors that are already stretched building existing projects which offer a much greater profit margins than building in more suburban/rural markets. This has already resulted in greater construction costs as contractors have to pay a higher wage to attract workers which applies to the entire supply chain creating higher supply costs. Since construction costs are so high this means that only projects in higher income areas are the most profitable as consumers have more purchasing power which allow profits for developers. The majority of new housing, retail, and other developments will continue to occur in higher income markets versus rural, urban-rural interface, and Class B-D neighborhoods which will further exacerbate the housing crunch.

Based on my experiences traveling to properties and meeting people throughout the Central Valley, we’ve reached a tipping point. Meaning, that if the state, utility providers, municipalities, and property owners don’t make significant changes it will perpetuate our biggest issues into a tailspin. Lack of affordability, lack of housing, labor scarcity, electrical blackouts, and rising construction costs may lead to runaway asset prices (inflation) relative to incomes, higher consumer prices on goods and services, and much higher income taxes to cover the costs of this mess. This will cause many people to flee the state or live in urban environments where there’s already a huge shortage of housing.

Typically, when asset prices dramatically increase as they have over the past several years, developers/investors seek cheaper markets such as the central valley and lower foothills. According to CoStar Research, almost half of the housing units built in California between 1990 and 2010 are in areas categorized as potential wildfire hazard zones. The issue builders, investors, and buyers will face is the availability of insurance coupled with the high cost of it. Undoubtedly, rents along with consumer prices will increase further exacerbating the inflationary cost of living in the state.

Although it will take several years it’s important that we start moving towards solving the real issues facing our state.

Urban infill markets such as Sacramento along with the Central Valley will realize the biggest gains in housing caused by a huge influx of residents permanently escaping fire zones and working families fleeing the high cost Bay Area/Los Angeles markets. Rents and housing prices will continue to increase even with rent-controls and minimal new construction. Housing and commercial properties not supplied by PG&E electric will be in high demand and preferred by consumers. Neighborhood retail centers will experience higher occupancy rates as more businesses open to fill the demand for consumer services.

California has hit a tipping point that will take decades to correct with many obstacles and struggles along the way. In the short-term (5-7 years) we’ll continue to experience inflationary pressure on asset prices, rents, utilities, medical, and overall consumer goods. In the end we’ll prevail if we deal with the punches head on, right now.